Grand Theft Bus return with their fourth, and arguably their strongest, album 'Say It With Me.' A collection of songs both old and new, the material on this album is again an evolution of the band's genre of progressive-pop.

As always, the songs on the new album possesses a great mix of styles and captures a restless band following their muse wherever it leads them - whether basic guitar-driven pop, dark synthesizer-driven anthems or instrumental pieces with electronic flourishes.

Get Say It With Me 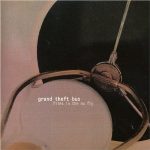 Flies In The No Fly